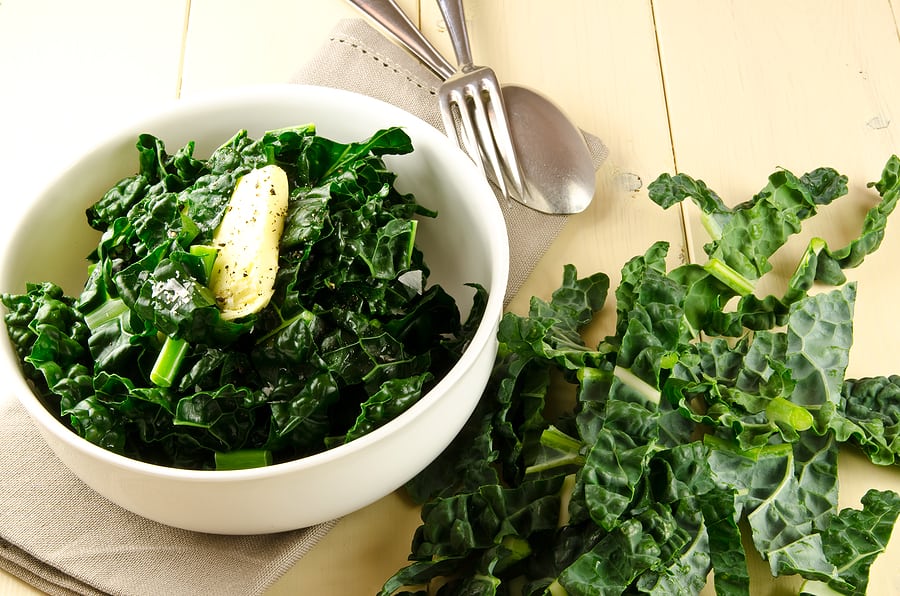 Kale is usually cooked and rarely eaten raw because of its strong pungent flavor. Small amounts of raw, young kale can be added to salads to bring a spicy note. Steam kale and serve with butter, lemon juice, and chopped bacon.

Cooking. Kale can be prepared just as you would spinach. It should not be overcooked otherwise it will lose its hearty flavor and texture. Cook kale until it is just tender, usually 5 minutes or less. To moderate the strong flavor and fibrous texture of some kale, you can blanch kale for 5 minutes before cooking depending upon the toughness of the green.

Serve. Italians steam kale until tender, then add olive oil, a little garlic, breadcrumbs, and sprinkle with Parmesan cheese in the last minute or two of cooking.

Harvest. Kale is harvested autumn to mid-spring, 55 to 75 days after direct seeding. In mild-winter regions where there is no snow on the ground, kale can be grown in the garden through the winter for winter harvest. In snowy regions, kale is hardy enough to stay in the garden with the protection of row covers.

Spring kale can be tender. The roots of harvested kale that is left in place will sprout new heads in one or two weeks. “Cut and come again” is the term for leaf vegetables that can be brought to harvest more than once. Spring kale is often the new growth of plants sown last autumn. New, tender growth can go directly into salads.

Varieties. You are likely to find tall kale varieties at the farm market in spring; look for ‘Lacinato’, ‘Toscano’, and ‘Red Russian’. Compact kale with curly leaves include ‘Dwarf Blue Curled Vates’ and ‘Dwarf Siberian’. The frilly kale used for garnishes include ‘Winterbor’, with green leaves, and ‘Redbor’, with purple leaves.

A related plant to kale is Portuguese kale or Scotch kale, also known as curly kale. This is a short-lived perennial with a single or branched stem with broad, oblong leaves that have crispy margins. Portuguese kale leaves are used in soups and as vegetable dishes.

Kale was grown by the Greeks and Romans. Kale arrived in northern Europe in the sixteenth century and from there traveled to North America.