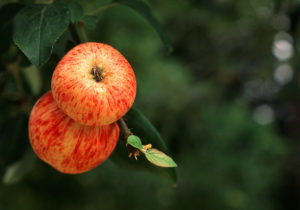 The Gravenstein apple is one of the earliest—if not the first—apple to ripen in the Northern Hemisphere each year. It comes to harvest as early as late July and early August, a good month or two ahead of most fall-harvest apples.

Considered one of the best all-around apples, the Gravenstein has a crisp, slightly acidy, tart-sweet flavor and is juicy with a full apple aroma. The Gravenstein—which has been in cultivation for at least 350 years—just might be the perfect embodiment of a delicious “old-fashioned” apple.

The Gravenstein is not only tasty for eating out of hand but is excellent for baking and cooking. Use the Gravenstein to make the season’s first apple pies, sauce, and cider.

In the kitchen, the flavor of the Gravenstein actually intensifies when cooked. After you bake or cook a Gravenstein, you will still taste the Gravenstein flavor. There is no generic overly-sweet apple flavor to cooked or baked Gravensteins.

The Gavenstein is an irregularly round-shaped apple, almost squat. It has a thin smooth greenish-yellow skin with light to dark red stripes.

If those two factors were not enough to take the Gravenstein off the list of “apples made for modern commercial success”, the apples on a Gravenstein tree do not ripen at the same time. A Gravenstein tree may require multiple harvests and can be labor intensive.

Of course, none of those factors detracted from the Gravenstein when apples were grown, harvested, and sold locally. But these days, the Gravenstein can barely compete against tougher, all-in-one harvest apples.

Perhaps that is why in places where the Gravenstein is grown, it is celebrated. In western Sonoma County, California—where the largest Gravenstein harvest in the United States occurs–the annual Gravenstein Apple Fair—which is timed to the harvest—happens this weekend in the small town of Sebastopol.

The Gravenstein came to North America in the nineteenth century—to what is today Sonoma County with Russian fur traders in about 1811 and to the Annapolis Valley of Nova Scotia in the mid-nineteenth century.

Because the Gravenstein is unable to compete in the world-wide marketplace where apples are available throughout the world even when they are not in season, Slow Food USA—which is dedicated to maintaining biodiversity and forgotten flavors–declared the Gravenstein a heritage food in 2005. With that designation, the Slow Food movement has taken on the preservation of the Gravenstein as a special project.

Early harvest Gravensteins are the best. Gravensteins that come on the market in the fall can be soft and mealy.