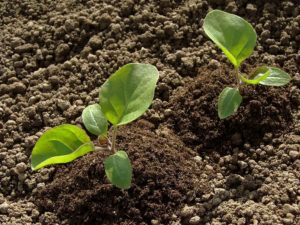 Aubergine or eggplant? You’ll find this vegetable under either name in cookbooks. Eggplant is the name used by most American speakers. Aubergine is chiefly a British usage.

Eggplant was the name originally given to the white-skinned, egg-shaped variety of the vegetable sometime in the mid-eighteenth century. Aubergine followed about 30 years later. By the middle of the nineteenth century, the term eggplant included the purple-skinned aubergine.

Try any color eggplant stuffed with chopped tomatoes, onions, and garlic cooked in olive oil. This tasty dish is called “The Iman Fainted.” It seems an Iman married a beautiful young girl who brought eggplant and olive oil as part of her dowry. Every night after they were married, she served the Iman stuffed eggplant. When the eggplant was gone, the husband asked his new wife where his favorite meal was. When she explained they had run out of eggplant, the Iman fainted.

Eggplant is always served cooked. You can bake, grill, stew, and deep-fry eggplant. Stuff eggplant and prepare for the Iman to faint.

Basics for growing eggplant in your kitchen garden:

Site. Grow eggplant in full sun. In hot regions where the temperature tops 100°F (38°C), it’s best to protect plants with shade covers. Avoid cool locations because eggplant blossoms will drop if temperatures fall below 50°F (10°C). Eggplant is a very tender vegetable that grows best in growing zones 5–12. It will grow as a perennial in growing zones 10 and 11.

Container Growing Eggplant. Eggplant will grow in a container at least 12 inches (30 cm) deep; choose a space-saving variety. Grow eggplant in containers in short season regions where containers will retain heat and can be moved to protected locations when temperatures cool. 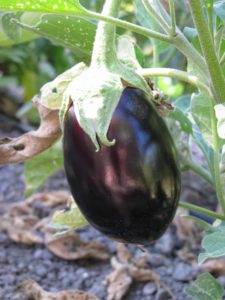 Planting Eggplant. In cold-winter climates, sow eggplant indoors 6–8 weeks before planting out. Transplant eggplant outdoors when the daytime air temperature average at least 70°F (21°C) and night temperatures remain above 55°F (13ºC). In cool regions, use row covers to control the air temperature or warm the soil by covering with black plastic.

Watering Eggplant. Keep the soil around eggplants moist. Soak the soil deeply using water basins around each plant. Poor blossom set and fruit color may be caused by low soil moisture. Use organic compost mulch to keep the soil moist and free of weeds.

Feeding Eggplant. Eggplants require moderate amounts of nitrogen and high amounts of potassium and phosphorus. Feed eggplant every 3–4 weeks with fish emulsion or compost tea to deliver these nutrients.

Companions. Eggplants grow well with all beans, peas, peppers, potatoes, and southern peas. Avoid growing eggplant with corn, fennel, and tomatoes. Avoid planting eggplants where peppers, tomatoes, potatoes, or other eggplants were grown during the past 2 years.

Eggplant Pests. Aphids, beetles, cutworms, and other insect pests can attack eggplants. Use row covers to deter insect pests or apply a light dusting of ground limestone to the plants. Place collars around eggplants at the time of transplanting to discourage cutworms.

Eggplant Diseases. Several viruses and fungi can plague eggplant. Plant resistant varieties, clear debris from the garden, and use a 3-year crop rotation to combat disease.

Harvest Eggplant. Pick eggplant when shiny, firm, and full-colored. Mature fruit is soft enough that thumb pressure will leave an indentation in the flesh of the fruit. Use shears to clip the fruit with stem attached. Harvest eggplant regularly to encourage further fruiting. Each plant usually produces 3–4 well-developed fruits.

Eggplant Varieties. Choose from these eggplant types and varieties: ‘Black Beauty’ the classic purple-skinned variety; ‘Dusky’ is purple, and ‘Rosa Bianca’, heirloom with white skin and lavender streaks. There are also many Asian eggplant varieties.

More tips at How to Grow Eggplants.